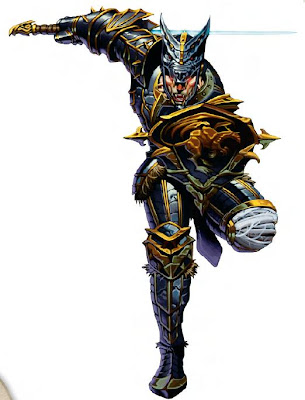 Today we take a look at an icon of the undead; Kas the Betrayer, once was Vecna's trusted lieutenant who was responsible of creating the Hand and Eye of Vecna quite literally.

In 4E, since his betrayal, Kas has styled himself as a ruler of a kingdom in the Shadowfell (by paying lip service to the Raven Queen) while maintaining an astral dominion of eternal darkness and everflowing rivers of blood. In his obsidian buildings, Kas awaits for the chance to deal with his sworn rival and former master.

Kas is a Level 26 Solo Soldier and vampire lord so he has the hallmark powers of Blood Drain (standard; encounter), Dominating Gaze (minor, recharge 6) and Mist Form (standard; sustain minor; encounter) of an ordinary vampire.

In addition to that, Kas has a Terrifying Smite (standard; at-will) which pushes an opponent 5 squares and immobilizes them (save ends). The Betrayer's Whirlwind (standard; recharge 6) blinds (save ends) anyone within his 1 close burst.

Kas still honors the knightly virtues of his evil paladinhood. Therefore he can mark enemies similar with the Paladin's Divine Challenge with Kas's Challenge (minor/1 round; at will). An enemy without 5 sqaures marked by Kas who does not include him as a target in their next attack takes 10 necrotic damage (save ends).

When bloodied, Kas's Recovery (free; while bloodied, recharges when Kas reduces an enemy to 0 hitpoints) allows him to spend a healing surge to regain 297 hitpoints out of his 1190 hitpoints and removes all adverse effects affecting him.

Kas is seldom found alone and his encounter entourage introduces his servants that unlike him, serves him unswervingly with loyalty; the Blackstar Knight.

These greatsword wielding black statues animated by undead spirits mark their opponents with its basic attack and duels with them to the end.

Anyone who has been marked by a Black Star Knight will find No Escape (move; at-will) as it teleports 10 squares to be adjacent to an enemy that it has marked.

It's Deathsword (standard; at-will) only works on marked enemies which increases its basic attack by one die (from 2d10 to 3d10) and an additional ongoing 10 necrotic damage (save ends).

It performs its Soldier's Duty (when reduced to 0 hitpoints) by granting 25 temporary hitpoints to undead allies within its close burst 2.
Posted by Questing GM