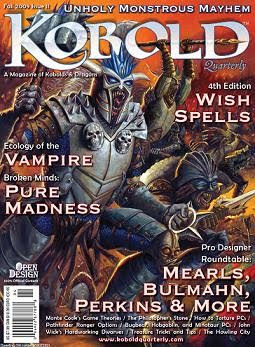 I was lucky enough to receive a review copy of Kobold Quarterly 11, courtesy of Wolfgang Baur and I can safely say that it is a mixed bag of articles for anyone playing 3.x or 4E. Being someone that is interested in both, needless to say I was enjoying the best of both worlds.

Out of the 13 articles, I have selected several articles and separated them based on interest in 3.x/Pathfinder and 4E.

For 3.x/Pathfinder readers,
Howling Werebeasts and Ecology of the Vampire are articles that touches on the aspect of becoming a lycanthrope and being a vampire respectively. Both are great articles that talks about how one becomes their respective new forms and what sort of processes do they go through like the physical trauma experienced and how to live as one.

Although the mechanics are in 3.x, I would say that the main attraction of the articles is still the fluffy details. It really helps to get into the minds of a lycanthrope or vampire. Players will find it a useful guide on how they should roleplay as these characters and GMs are given a few pointers on how to handle them.

Spell-less Ranger is a Pathfinder variant for the ranger class as the title speaks for itself. This is probably the first Pathfinder incarnation of the same variant for 3.x in Unearthed Arcana.

Torture and Fear on the Tabletop is a very short and simple method of implementing the fear of torture into your 3.x game. It introduces three tables varying in the degree of torture implemented on the character with devious effects from straightforward damage (lethal and non-lethal) to permanent ability drains. The best part of this is that it makes the player roll the result rather than staining your hands with the pain you are inflicting on them.

For 4E readers,
Most articles I feel are crunch heavy and to be honest, I think the design of their crunch is not as strong as their 3.x/Pathfinder counterparts. In Wishing Well, they tried to put wish spells back into 4E but what they did in the end was just make it an abstract magic item. It is an interesting idea but I don't feel that it takes any radical steps to make them game-moving as wish spells had always been which cheapens the spell.

What I do like about these paragon paths is that some of its features builds upon the racial powers or traits when you use them as playable races from the Monster Manual. One small nitpick for this article is that the color coded powers were a little confusing at first until you've read them properly.

Don't be fooled by the Mysteries of the Philosopher's Stone which is actually about an artifact that leads you to create the philosopher's stone with a ritual. This will be an interesting artifact to drop into your game with a heavy alchemist theme like Full Metal Alchemist.

For everyone,
The Howling City is an evenly fleshed out derro city (with a nice map) with 3.x and 4E stats but the next article that I'm going to recommend sold me for this issue.

Other than the crunch and fluff presented, I feel that the best article of the whole issue is Running Across the Screen where they asked 16 game designers/writers on various questions about gamemastering. You are not going to find any place else where they've gathered the most diverse selection of people from various companies and game systems that share their thoughts and style of gamemastering.

From Jason Bulhman (Paizo), Monte Cook (Malhavoc Press), Chris Perkins (Wizards), Mike Mearls (Wizards), James Jacobs (Paizo), Chris Pramas (Green Ronin) to Robin D. Laws (Laws of Good Gamemastering) and some folks from White Wolf, they talked about what is the job of the GM, running encounters and sandboxes. Reading this article just emphasizes the point that there is no 'one true way' and that every GM has their own style.


I've already reviewed 9 out of the 13 articles (not including the editorials) so if you find that this issue is going to fit your bill, you can find it at DriveThru RPG as a PDF for $5.99. Don't let the kobolds scare you.
Posted by Questing GM

I doubt there will really be overlap in the conceptual sense, since Wizard's of the Coast's racial paragon paths tend to be quite out there (whoever thought Dragonborn would get to fly). Some of the paths will most likely be overshadowed, though, due to some design problems.