It has been years since I've participated in a RPG Blog Carnival. My records show that my last entry went as far as 2010 when I actually even hosted one (gods, it feels so long ago that I had actually forgotten about it!). I remembered the times when the RPG Blog Carnival was in danger of dying out several times, but I'm glad it has now managed to find a new home among the community. 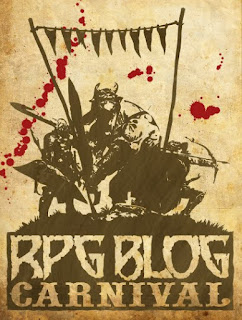 With Roleplaying Tips hosting this September's RPG Blog Carnival and the topic of the month being Game Master Tools, Aids, Apps & Hacks, I thought it was the perfect topic for me to share what I'm currently using to GM.

As much as I grew up having stacks of paper, scribbled notebooks and printed handouts during the early days of my GMing, I have always been on a quest to look for digital tools to help become more organised as a GM. Thanks to the proliferation of digital tools, web and mobile apps (some made for generic purposes, and some specifically with RPG users in mind), I think it would have been impossible to come up with a list if this was done about 6 years ago.

While I'm still on the quest to find that one perfect GMing tool/app (or has someone already done that?), my current GM digital workstation is a hodgepodge of tools and apps that I used professionally, but have found uses for GMing.

Without putting in any real investment to any of the tools when it comes to digital tools, most of the tools that I am about to present here meet the following criteria to various degrees (except for the price point, which is the first thing that will make or break the tool for me):

Although not strictly a tool that I use while GMing on the table, but every game has to start with an inspiration and this is where I find them, curate them, store them and gloss over when I'm thinking about an NPC, a character description, a location, a map or just any gaming-related material. I still find it strange that the online gaming community was not set on fire when Pinterest first came out, but it has become an invaluable resource for me when I'm looking for that image or inspiration. Not only can it be an endless supply of images if you follow the right people, but it also allows you to sort and organise those images into Boards, which you can name to fit whatever type of images you want to keep them as. So far I've collected more than 24,000 pins, and I'm more than happy to let anyone peruse my pins and follow my Boards, which you can find here.

Of course, the bulk of my GMing work is usually writing and I've been using Evernote for my professional writing, so it was only natural that I would want to see if I could use it for GMing. EverNote is practically designed for organised writing. With its system of Notes, Notebooks and Stacks, it does allow me to manage my random ideas, and also for something more structured such as notes for an upcoming session. The Basic (read: Free!) is more than enough for me (both professionally and GMing, but I use separate accounts for each) to have a place where I can quickly jot down a quick thought or idea store them for later, which I can easily find through the Notebooks that I kept them.

Given the love affair that the RPG community has for all things from Google, it should be no surprise to anyone that this would be in my list. However, I would say that I have only recently started using Google Docs, and not for the writing part of it (since I already use EverNote for that), but the online spreadsheets. The main strength that Google Docs has for me is it is already kept in the cloud-storage of Google Drive, so I can practically access it from anywhere. With the sheets, I mainly use it to create tables, especially for crunchier systems like 5th Edition D&D, and can share them with anyone who has a Google account.

Wikis can be a very powerful tool for GMs. I once used Obsidian Portal as a campaign wiki, but was halted by its limited features and storage space with the free version of it. I needed something that I could manage independently and discreetly without having to worry about storage space. Then I stumbled upon TiddlyWiki and my prayers have been answered. Although it took a little learning for someone as code illiterate as me, but I eventually got the hang of it and it is now one of my most powerful tools at my disposal. Not only have I exclusively used it to create a campaign wiki, I have rewritten entire rules into a wiki, with proper tags and links, so that I can easily reference them on the table, rather than having to remember where and flip through the rulebook during a session. With the right tags, it helps greatly when studying rules and find connections between them that you could otherwise miss.

While I use Evernote as a place to put my improvised notes, they still need to be processed and put in an interface where they can actually be useful. This is where Trello comes in, and another tool that I stumbled upon from my professional writing. Although mainly devised as a project management, productivity, or to-do list app, it's incredibly versatile to do whatever you want it to do, after you have figured out how it works (and GeekDad can demonstrate how to do that for GMing). If I could run a session where there is an internet connection (which says a lot of how much I wish there was an offline app version available), I would probably use Trello as my GM screen, note-taking and information organiser all-in-one. The reason why I would use it over Evernote while on the table, is its interface of cards and lists, which gives you a wider picture that you need when running a game, rather than having to search for specific notes that you need when the situation arises. The free version has all the most basic functionalities you need (without restrictive limits), but paying for the premium version with the power-ups could increase its usefulness significantly.

Another indispensable tool for GMs is flowcharts. Narrative events, NPC relationship maps, timelines, these are some of the flowcharts or mind maps that can help a GM to plan and improvise better when they have the big picture in view. I will admit that I haven't really used XMind a lot, only coming to learn of it when I started DMing for 5th Edition Dungeons & Dragons, but I can't complain when it's free, and has numerous templates of flowcharts that doesn't need me to draw them painfully from scratch. I'm already loving what it does on the surface, and can't wait to see if there are any more surprises underneath it.

Another tool that I once used but to never any great effect when it comes to narrative flow charts is Twine. Mainly used for writing gamebooks, you can appreciate the flowchart-like view that can be applied for GMing, but in my mind it doesn't really support the open-endedness that RPGs allow, so it is terribly not suited if you are running a more open game. Still, it wins out against XMind in some respects, because you can actually fit in an entire description into each node, and I have seen it being used by game writers to trace quests or plotlines for CRPGs.

You may have heard many good things about Scrivener and how it can be used for GMing. Well, yWriter is the free equivalent that I've found. Admittedly another tool that I haven't gotten the most use out of because it is probably the most connected. But I can see the potential for its novel style of organisation that differentiates between characters, locations, items, and scenes and allowing you to trace where and when they appear into 'chapters'. This one has a real potential to take over the jobs that I currently assign to EverNote and Trello, but I don't know how long would it take me to unlock its full potential.

Well, these are currently the digital tools that I'm using as a GM, and I'm definitely looking for more. I already have my eyes on a few free charting applications for my map making needs, so I will update this post when I find any new additions.

If time permits, I may even write a follow-up post to this to share my offline tools, or my traveling GM's kit when an internet connection or a power outlet is not available. I still love my pen and paper (with a twist!)

If you have any recommendations for tools (digital or otherwise), I would love to hear them, so sound off at the comments.